GRA is, at the moment, discontinued. It was a fun experience, and there's potential in the genre but the code base is, well, crap, to say the least and the only way to salvage it is to rewrite it from scratch. I moved to another project, Unending Galaxy, which, at the time of this post, is reaching 1.0.

If you want to know more about GRA and why it has been terminated, i'd suggest to read this post.

For some reason, the download page has been put to rest. It's now fixed and Grand Rogue Auto 0.6.9 is now available for everybody. Like i said earlier, don't expect me to continue much further on this project. The engine behind it is now solid enough and GRA has always been a tech demo. I can now make a good game out of it while GRA was, let's say 'dumb fun'. It's still highly moddable, even if the process can be relatively hard to grasp. And people can right now add a ton of content through the "dungeon" system. I don't think that modding the engine myself would help very much.

I do know there's a few broken promises from the roadmap. So let me explain myself. I basically have ten unfinished artificial life related projects That's what i do, AL. I have a relatively accurate zombie outbreak simulator (yeah accurate and I stand by this word), I have a totally abstract 3D opengl darwinian life simulator, and so on. I'm interested in this kind of stuff, GRA has reached its limit. Well, not really, but being restricted to the GTA-RL genre is kinda a problem in itself.

So, the next game, based on the same engine, called Necro-Watch, will be relatively unique despite being based on the good old zombie apocalypse scenario. It will have a XCOM vibe, it will be moddable, procedurally generated, and difficult. This project will be, as usual, a freeware. But, as I obviously need to make a living, it will also be a "donate-ware". In other words, you'll be able to download the full game free of charge, and if you think it deserve some credit, you can donate a few cents/dollars/euros/whatever to keep me going. No copy protection in any shape or form. But of course, let's be honest, if I gain money building this simulator, I will continue doing so, otherwise, well, I'll get a boring job.

As last year, it was summer so I wasn't around. However, I did produce some code, and even enough to publish a new version of GRA. This is kind of an important update because I am going to explain what is now going to happen to this project and to the next one. 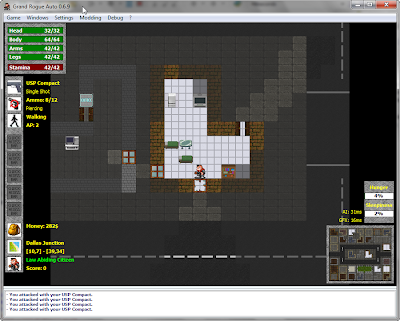 A packaging issue (wrong executable put into the folder) causes the 0.67 to crash with the default city seed and probably many others. This issue has now been corrected, and the updated package is available for download.

Sorry for the inconvenience.

Email ThisBlogThis!Share to TwitterShare to FacebookShare to Pinterest
Tags: release

I have updated the website using a darker design, and while at it the main pages have been updated. I merged the screenshots and videos (for now), updated the roadmap page with a more recent version of the document.

An official GRA Twitter feed has been added. No idea if I am going to use it as I am not really into social media thingies. I will try to check it more or less regularly. On the down-side, the forum link has been removed. My web-host decided to drop the related website anyway.

The Wiki Documentation is still outdated, but I am going to fix that as well. 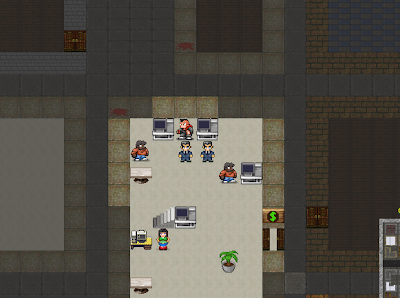 This quick release fixes a few annoying issues introduced in v0.6.x. It also adds new features regarding thievery. First, a new NPC type, the thief, has been implemented. As the name implies, it will steal things from containers. A new building, the bank, has also been added. Coffers in the banks contains a lot of money. Also, containers found in houses may contain money, and may be locked. Alarms will also attract cops. None of those changes are fleshed out yet. I am mainly releasing this early to remove the (involuntary) money cap put on the player and to fix some annoying bugs in the map generator.

The next version will improve over this and should add the news system. I will also try to link the bank to the city economy.
Read the full post >>
Published by EsKa at 03:56 2 comments: